Blog He Likes to be Asked 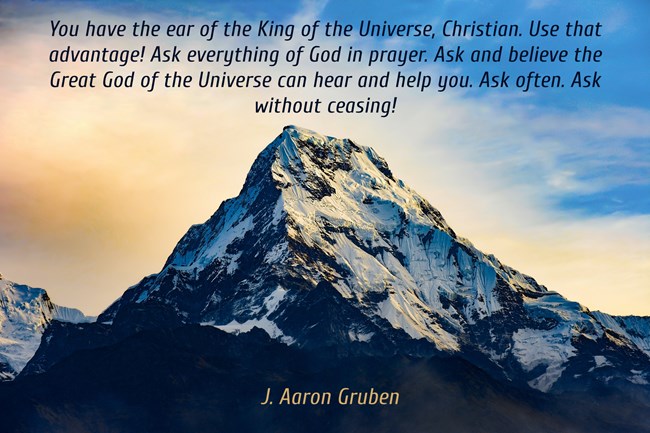 He Likes to be Asked

“Therefore I tell you, whatever you ask in prayer, believe that you have received it, and it will be yours.” –Mark 11:24

How often we underestimate the value and the power of prayer!

The words of Christ in Mark 11 are confident in their tone: if we ask and believe, we will get our requests from our Heavenly Father. Could it actually be that simple? Scripture certainly seems to say so. Our jaded hearts find it difficult to believe God intends to answer our prayers. Faith is strangely challenging in the context of prayer.

We should trust the claim of Christ that prayers will be answered, because of what flows from certain spiritual conditions: A) God is a loving heavenly father, B) we are His children, and C) He’s all powerful and can hear us.

This is exactly what Christ tells us in Luke 11:13. “If you then, who are evil, know how to give good gifts to your children, how much more will the heavenly Father give the Holy Spirit to those who ask him!”

Put these two concepts together (believing prayer works and our Father hears it) and we see a Scriptural picture of God in prayer. This is parallel to Strawberry the horse’s comment about the Great Lion Aslan in the Magician’s Nephew: “I’ve a sort of idea he likes to be asked.” James tells us this as well. “You do not have, because you do not ask” (James 4:2b). I think there are times we make life harder on ourselves then we need to, and don’t have the things we want (exactly as James says) because we simply have not bothered to ask our Heavenly Father. Petitioning God in prayer acknowledges our dependence on him and brings him honor. I think this is one major reason God “likes to be asked.” Sure, He can give us what we need without our praying for it. But he wants us to pray, because it’s good for us, and because it brings him glory.

Matthew Henry (in his commentary on Luke 11) wrote, “That man is a brute, is a monster, that never prays, that never gives glory to his Maker, nor feels his favour, nor owns his dependence upon him. One great design therefore of Christianity is to assist us in prayer, to enforce the duty upon us, to instruct us in it, and encourage us to expect advantage by it.”

Prayer in faith is chivalrous. Though they were rough warriors, we read many instances of chivalric knights in the Chansons de geste praying sincerely to God, and we find them examples of faith expressed in prayer. Leon Gautier wrote, “Our knights were not content with the mere belief in God: they considered it their duty to abandon themselves wholly to Him, and not to limit their trust in Him. Faith (or trust) was an integral portion of the Code of Chivalry. ‘Qui en Dieu a fiance il ne doit estre mas.’ (‘He who has faith in God shall not be confounded.’)”

For many of us who believe strongly in God’s sovereignty and providence, there is a danger of thinking of prayer as a mere formality, of doubting that they actually change things. But we have the words of Scripture assuring us that they indeed do change things. God listens for our prayers, and He answers them.

Consider Moses petitioning God on behalf of wayward Israel to stay the judgment God had decided to bring (Deuteronomy 9). Consider Abraham begging God to spare the righteous in Sodom (Genesis 18). The words of Scripture sound very much in such instances as if God changed His mind when His people asked in prayer. Could this really be what happened? We cannot know for sure. But such dramatic instances of effective prayer are recorded in Scripture in part so we have the question in our minds: “maybe my prayers are more effective than I ever suspected.”

It is so often true for many of us that prayer is a last resort. If the words of Christ in Mark 11 are true, it ought to always be the first thing in our minds. So why not ask? You have the ear of the King of the Universe, Christian. Use that advantage! Ask everything of God in prayer. Ask and believe the Great God of the Universe can hear and help you. Ask often. Ask without ceasing!