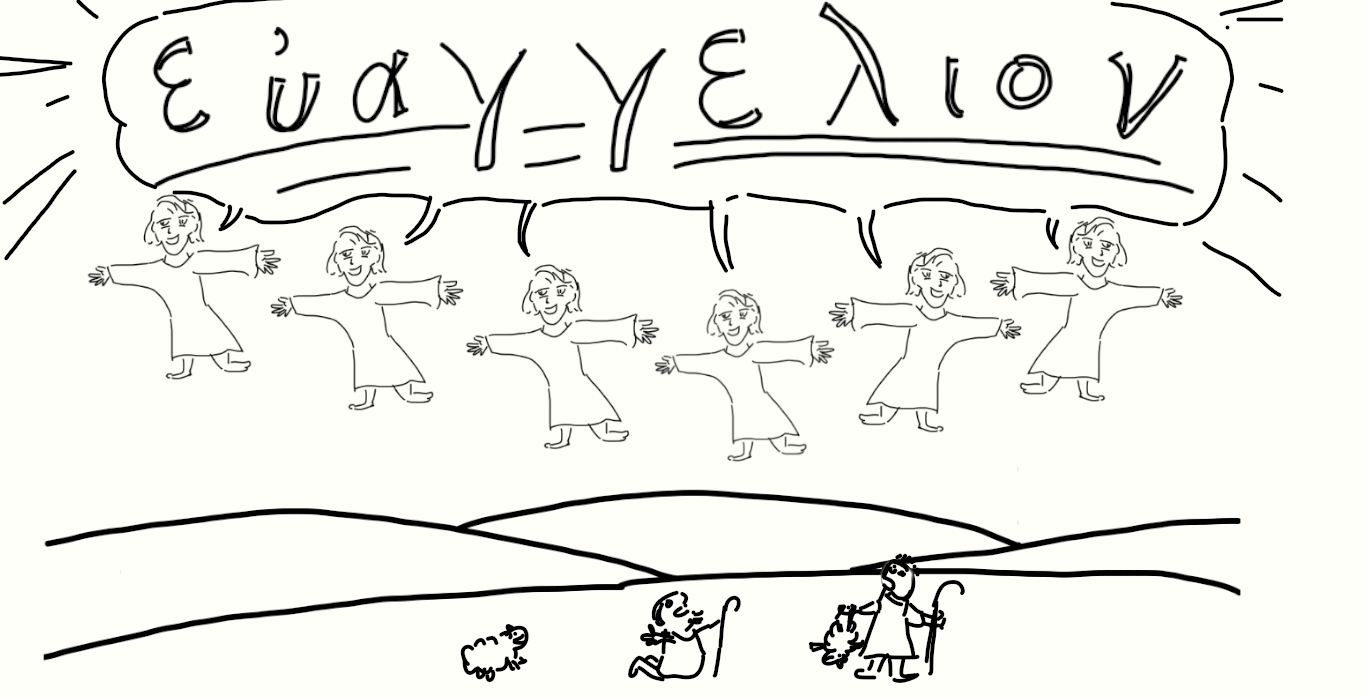 A word used so often it’s become part of our everyday English vocabulary. But how often do you think about what the word really means, or why the writers of the New Testament (and the great Author of the New Testament) picked the term “gospel” to describe its message?

Imagine you’re alive in 34 AD, and Christianity is just starting. Suppose one of the Apostles walked up to you (like, say, during a posca break between church planning meetings) and asked “if you could describe the whole message of Jesus Christ in a single word, what would it be?” Would the word “good news” spring swiftly to your lips?

Let’s think about some other possible candidates.

The Good Story. You could have called the message of Christ’s work the “good story” – the εὐιστορία (“euistopia”) to make it sound all New Testamenty. Isn’t it the greatest story ever? The message of Christ is the story of God redeeming a lost and desperate people, a people in all-out rebellion against his kingdom, in an incredible way nobody expected. The Son of God himself came down to the world, incarnate and died in the place of rebels, then rose again – beat death itself, and burst out victorious from the jaws of Hell in epic victory. That is a good, good story!

But calling the message of Christ’s life the Euistopia might imply it’s only a story. Part of the wonder of the Savior’s work is that it’s history, not just a tale to entertain or educate, not just another incredible myth like Orpheus going to hell and back. It’s something that actually happened.

The Invitation. You could have called the message of Christ’s work “the invitation,” εὐπρόσκληση (“euprosklaysay”). Isn’t it in essence a wonderful invitation of salvation by God? Christ’s words in Revelation 3:20 certainly give us that impression: “Behold, I stand at the door and knock. If anyone hears my voice and opens the door, I will come in to him and eat with him, and he with me.”

Here indeed is an astonishing invitation by the Savior! “Come now to me! I died to rescue you. Open the door and I will come in to you.” But is it only an invitation? The might of our Savior is that He doesn’t stop at just inviting those He calls: he brings them in.

So euporsklaysay is not quite sufficient either. It doesn’t give the full picture.

The Good Judgment. You could have called the message of Christ’s work “the good judgment” – εὐκρίση (“eukrisay”). Contrary to popular opinion, Jesus’ work was not all about peace.

Christ’s words can sound scary. But to people who groan at some terrible injustice, to those who’ve been victimized and ill-used by wicked men and women, to those afflicted who wait for somebody to do something to make it all right again, these are comforting words – especially when the sword is brought by One who is ultimately just.

But the sword of God isn’t good news to the wicked. Justice is wonderful and good, but it’s very bad news if you’re the guilty party. And the big problem, as a human being, is that we’re all the guilty party.

So eukrisay isn’t quite the right word to use for Christ’s work either.

The Good News. The word the writers of the New Testament picked to describe Christ’s work was “the good news.” εὐαγγελίου (“Euangelion”) is the Greek word Paul used for the gospel (and you can see it in Philippians 1:12). It literally means “good news.” It’s derived from two words:

This is a perfect term to describe the work of Christ. It is good work, from the embodiment of all that is Good. It is the news of that good work. It’s not just a story, but headlines, true headlines. It’s something real and tangible, and part of the human experience. It’s good news that’s a message from God to us. It’s a message He takes the initiative to send to us while we’re busy besieging his kingdom, rebelling against him.

And here’s where we can sneak a timely, Christmas message into this little post. The message captured in the term God picked to call the word of Christ – the euangelion, the good news – is a merry, merry message indeed. The right response to any human heart considering Christ’s work is unbounded joy, astonished joy. The good message, sent by God and declared aloud by hosts of angels to a little lonely night shift on the evening Christ was incarnate, is the best of news to weary wicked sinners.

That is the core of the work of Christ.

That is the gospel.