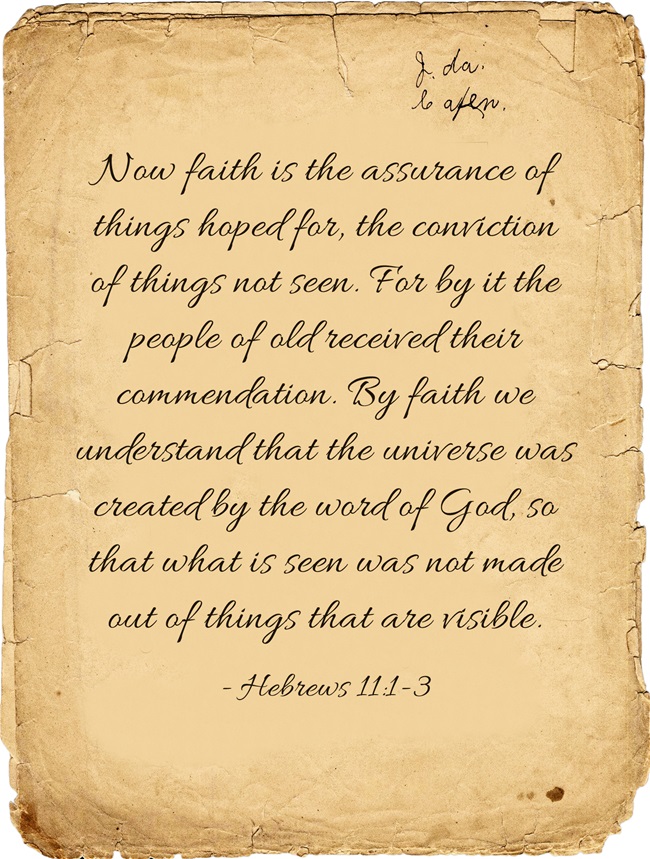 “Now faith is the assurance of things hoped for, the conviction of things not seen. For by it the people of old received their commendation. By faith we understand that the universe was created by the word of God, so that what is seen was not made out of things that are visible.” –Hebrews 11:1-3

The test to tell if there are crackers in my pantry is simple enough. It is empiric: I can see them, taste them, feel them. But the test to tell if the law of non-contradiction is true would use completely different evidence that is not sensory in nature. This leads to the idea that “the metaphysical nature of the subject under investigation determines the valid methods to be used for testing it.” And a common fallacy is to insist on the wrong kinds of evidence for the subject under discussion/investigation. It is what Greg Bahnsen called “the crackers in the pantry fallacy” in his historic debate with Gordon Stein.

This Sunday, my pastor preached on Hebrews 11:1-3, and masterfully reminded us of the reasonable nature of our faith. His arguments were well crafted, and I’d like to take today to briefly summarize them in the hope that God will use this to strengthen your faith.

The “crackers in the pantry” fallacy is rampantly committed when arguing against faith and religion. Atheists like to define faith as belief without reason and bully us into accepting it as the very antithesis of science. But if they use any evidence at all (apart from strings of clever and derisive ad hominems), they present the wrong kind. They compare things you can touch, taste, and feel, to things you cannot. It’s comparing apples to oranges. There is nothing illogical about being a good scientist and accepting that there is a spiritual world beyond science. And “crackers in the pantry” fallacy is committed with notorious frequency (as the context of Hebrews 11:3 alludes to) when theories of the origin of life and the universe are concerned.

By its very nature, the argument that life evolved from chance is a faith assumption, and cannot be proven empirically. None of us were there to observe our origin. An origin theory’s “metaphysical nature” does not allow it to be evaluated by empiric observation (at least directly). Thus, the question is not “what theory of the origin of life and everything around us is true based on science (because science cannot measure these theories)?” It is not, is religion compatible with science? But the right question is “which origin theory gives us the best ground and proof for both reason and science as we know them?” In simpler words, the important question to ask is “what theory fits best the reality we see around us?”

Thus, everyone has faith when examining “the big questions.” But is it a reasonable faith? The more I read and consider, the more I find the Christian faith to be the most reasonable of all the religions of the world (including atheism). When the right evidence is weighed, Christianity makes the most sense out of our experience in life. It gives the most solid basis for observation in science and gives the best ground for reason and the existence of morality.

When I consider the world around me (in its scientific, aesthetic, and metaphysical parts), I am easily convinced that a theory of an eternal and intelligent God who created the universe is far more reasonable than the odd fairy tale that the universe randomly sprung up by itself out of nothing (or out of some eternal sludge). Chance has no power, it’s just a mathematical way to describe the behavior of objects already existing.

This has enormous implications to my life. So there’s a God? The investigation of who He is would be the next step. It’s Christianity that I find the best framework to explain the life around me when I do the work of investigating available evidence using proper reasoning. And that has even more enormous personal implications. How often, even as a Christian, am I guilty of treating my faith like a tradition or a fairy tale to evoke good feelings! It’s true whether I like it or not, and I had better take it (and especially its Object) seriously.

If I accept A) there is a God and B) He is the Christian God, then I know I have an immortal soul inside a mortal body, and that death is not the end of me. I know the Bible is the actual word of God Himself, to whom I owe my life, and in whom I hope for eternal bliss. I know that God is a personal God and has the right to tell me how I ought to live my life. I know that I have lost my chance of a real eternal paradise because I’m sinful. I know this infinite, personal God became flesh in an astonishing incarnation and took my damnation. I know he rose from the dead. Accepting the God of the Bible expands my view of the world. The entire universe has glorious meaning (to glorify its Maker), and a great purpose (renewal at Christ’s return). My life has meaning: even the little things matter. And that’s not just because I long for meaning, but because all of this follows from accepting the well supported basic tenants of a reasonable faith.

If you can, listen to Doug Coyle’s excellent sermon here.

You can listen to the Bahnsen and Stein debate on the existence of God here.