“My Jesus, my king, my life, my all, I again dedicate my whole self to Thee. Accept me, and grant, Gracious Father, that ere this year be gone I may finish my task. In Jesus’ name I ask it. Amen, so let it be.”[i]

Dr. David Livingstone penned this in his journal on his birthday in 1871. He had just left the first westerner he’d seen in years, trekking once more into the unexplored wilds of Africa. This journey would prove to be his last. In the years before he wrote these lines he had fruitlessly searched for the source of the Nile, all the while lost to the eyes of Europe and his family, who thought him dead. What task does he implore God to enable him to complete? This was the overarching mission of opening East and Central Africa to the gospel and peaceful trade, both as ways to end the slave trade that plagued the country. But this mission he had worked on for so long would never substantially be complete in his lifetime.

Mixed emotions were evoked in me as I read this quote in Jay Milbrandt’s masterful biography of Livingstone (in The Daring Heart of David Livingstone: Exile, African Slavery, and the Publicity Stunt That Saved Millions (aff link)- I just finished this book and would highly recommend, by the way). This prayer is beautifully intimate and urges me to be close enough to my Christ to pray like that. It is a missional prayer, inspiring me to strive for great things for God. But isn’t it ultimately a failed prayer? David Livingstone would die two years later without having finished the task he had in mind.

Mr. Milbrandt does an admirable job of demonstrating how Livingstone’s work did ultimately achieve wild success, though after his lifetime. Slavery in East Africa was outlawed just a few months after he died. British colonies soon followed in the trail of exploration he blazed, and the gospel followed. It is no accident that today some of the biggest Christian populations in Africa are centered around the regions Livingstone spent his time in.[ii] Wonderful news, but Mr. Livingstone never got to see it. He spent himself and his family on the mere hope his work would one day bear fruit. The amazing thing about the prayer he scrawled to his Master in his journal that hot African day was Livingstone’s persistence in serving God despite constant setbacks.

What a good thing to remember on this New Year’s Day in 2018! Let us dedicate ourselves wholly to Christ, as David Livingstone did, and devote the work of this year to Him. This is a good thing to do periodically (even more than once a year) because we need a reminder that our existence as Christians is meant to bring God glory. It is so easy to let the pleasures of life, the entertainments that surround us, our ambitions for ourselves and our families, or even good ministry ideas, distract us from the basic fact that our purpose it to serve Christ wholly.

Dedication of ourselves to Christ allows us to profess our belief and devotion to him with our mouths. Romans 10:9: “because, if you confess with your mouth that Jesus is Lord and believe in your heart that God raised him from the dead, you will be saved.” Periodic dedication for ourselves to Christ is a good thing because it is prescribed by God. Romans 12:1: “I appeal to you therefore, brothers, by the mercies of God, to present your bodies as a living sacrifice, holy and acceptable to God, which is your spiritual worship.”

But in many ways, this is the easy part. It’s simple enough to speak words about whole devotion. Where the real work (and the real adventure) happens is when we put flesh to those words by actually living lives devoted to Christ. Perhaps it would be better not to say these words if we don’t intend to really follow through. Is that not exactly Christ’s point in the parable of Matthew 21:28-31? The son who obeyed and went into the vineyard (even though he originally said he wouldn’t), was the one who “did the will of his father.” He was preferred over the son who had nice words but didn’t follow through. Let us be warned to mean what we say when we dedicate ourselves, and the work of this next year, to Christ.

Yet sometimes I find myself reluctant to dedicate myself in prayer wholly to Christ, as Livingstone did, for reasons other than altruistic honesty. Sometimes there is a thing I want to hold back. Some dear pleasure I’m reluctant to give up for Christ. I don’t dedicate “my whole self.” And yet God says, “For whoever keeps the whole law but fails in one point has become guilty of all of it” (James 2:10). He also commands me to do “whatever I do” in the name of Christ (Colossians 3:17).

Sometimes I’m afraid to dedicate my tasks to Christ because they might fail. I only want to give Him my success. And yet God reminds me His “power is made perfect in weakness” (2 Corinthians 12:9). Sometimes I hesitate to dedicate my whole self to Christ because I’m ashamed of past sin. All the times I’ve made great promises and then turned around to break them come to mind and hold my tongue. I sometimes feel like too dirty of an offering for a pure God. Yet again, God speaks to my hesitation. He reminds me my old self has passed, and the new is here (2 Corinthians 5:17). He commands me to wash my past clean in the perfect blood of his Son and to rise from the healing pool a new man to do His work and His will.

Livingstone expressed similar hesitation years earlier. He wrote this on a New Year’s Day during a failed expedition down the Rovuma River and along Lake Nyassa: “We now end 1866. It has not been so fruitful or useful as I intended. Will try to do better in 1867, and be better–more gentle and loving; and may the Almighty, to whom I commit my way, bring my desire to pass, and prosper me! Let all the sins of ’66 be blotted out for Jesus’ sake.”[iii]

Let us renew our vows to Christ again this New Year. And without fear! Look forward with tenacious hope to another year of work for Him in whatever creative ways we can think of. Let His blood blot out our sins. Let us plan to slog through whatever obstacles come at us, like Livingstone through the African wetlands. Let us persevere with a song in our hearts and unquenchable joy, as we spend ourselves for the great Savior who already won heaven for us! Let us ask in Jesus’ holy name. Amen, so let it be! 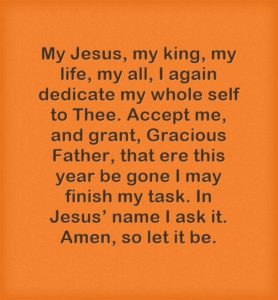