Blog King Frederick the Great (an excerpt from King) 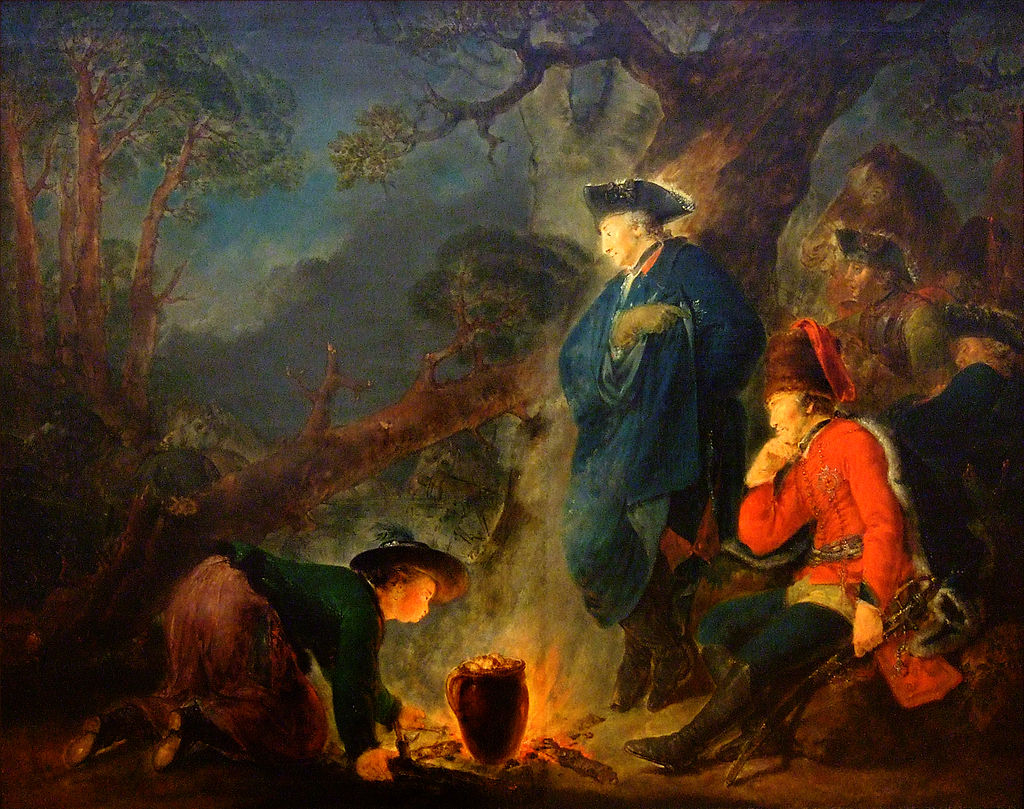 King Frederick the Great (an excerpt from King)

The Place: The Schlossfreiheit, a castle in Berlin

Young Prince Frederick peered furtively over his imported French cloak to ascertain if he was followed, before pushing open the creaking oak doors in the halls of the little house on the Schlossfreiheit. A rebellious smile crept over his youthful face as he noticed the cloak and thought of the Francophobe father he was defying. A narrow flight of stairs led down to a dark passage, and the boy raised his candle to illuminate the steps as he quietly trod down them and pushed open a second door, walking into a room his father knew nothing about. He was here at last, to rendezvous with his forbidden companions. They were all there, staring down at him from the shelves: upwards of 3,000 books sitting on the bookcases of his secret library. Frederick William, that eccentric King of Prussia, had forbidden his son to learn anything but military drills and religion. He’d picked a special tutor for Frederick especially because the man had been a soldier. But what the king didn’t know was that the old Huguenot warrior was also an old scholar and had helped Prince Frederick import an impressive library of poetry, Greek classics, and literary books in secret.

Frederick’s smile that had earlier lit his face broadened, as he thought of another adventure he’d been recently planning. He wouldn’t have smiled, however, had he been able to foresee the future…

A soldier and French Huguenot from the city of Brandenburg, Duhan de Jandun’s bravery in the siege of Stalsund caught the eye of Frederick William. The king was looking for a military man to tutor his son and appointed Jacques for the job. What Frederick didn’t know was that in addition to being a soldier, Jacques was also a brilliant scholar. He tutored young Frederick for 12 years before being exiled to a city called Memel by the king after it was discovered he’d secretly been teaching the prince more subjects than the King wanted. When Prince Frederick became king he brought back his old tutor and made him director of the Silesian Liegnitz Academy. He served there 6 years before his death, and his sister was given a pension for life in his honor.

When he was 18 Frederick decided he’d had enough, and attempted an escape from his overbearing father with some faithful friends, including fellow officer Hermann von Katte. History tells us King Frederick William got wind of the plot, and captured the group of friends before they could leave. Some were banished, some imprisoned, and Katte executed – legend has it that poor Frederick fainted when he saw Katte pass beneath his prison window toward the gallows in Kustrin. King Frederick William (sometimes called “the Soldier King”) would actually order his own son executed, in his rage at the young prince’s action. He considered his actions desertion, as Frederick was a major in the Potsdam guards (the strange old King’s favorite regiment). Indeed, it would only be the intercession of many Courtesans and even foreign monarchs on behalf of young Prince Frederick that saved his life in the end. He also considered forcing Frederick to abdicate as crown prince in favor of his brother Augustus. In the end, Frederick was imprisoned in the Fortress of Kustrin for two years. When released, he returned to court, but relations did not improve between father and son.

Frederick became famous for his interest and patronage of music, philosophy, and other subjects that his father disapproved. It may be that Frederick’s interest in some of these stemmed from his animosity toward his father; the two Fredericks seemed to always be at odds. King Frederick William’s main interest was military oriented (a subject young Frederick abhorred), and the Prussian army was called his great hobby. The king participated briefly in the Great Northern War (in which a coalition of nations challenging the Empire of Sweden), but gained nothing of significance from his involvement. He was not a bad king overall; in fact, he worked hard to encourage farming, advised storing grain to sell in bad times, created a manual for public servants, and left a large surplus in the royal treasury.

But although the eccentric Frederick William ruled his kingdom with tolerable competence, he appears to have been a dismal failure at home. He was determined his son should be a model soldier, and trained him fanatically from the earliest ages in solely military matters. Young Prince Frederick was mistreated and beaten for many years for defying his father. Frederick William terrorized and beat his other children and wife as well (though not with the severity with which he treated Frederick). Some historians have said he suffered from Porphyria, a genetic disease causing neurological problems, although it is hard to justify his actions for any reason. Some have speculated he also just disliked Frederick, preferring his younger son Augustus William. Certainly one point of contention between the father and son was whether a good king should involve himself in more than just military matters.

Frederick always had support in his studies from his mother, Sophia Dorothea of Hanover, and his grandfather, George I of Great Britain. Sophia was first cousin to her husband Frederick William but differed from him in nearly every aspect – including her great interests in art, science, literature, and fashions – and they did not get along well. In fact, the story goes that Prince Frederick’s parents had disliked each other from their very first meeting as children. Although she had no influence on her domineering husband, Sophia had a good relationship with her son, who became very attached to her. She lived for another 17 years after her husband died.

In an arranged marriage Prince Frederick wed Elisabeth Christine of Brunswick-Bevern in 1733 when he was 21. She was a Protestant relation to the ruling Austrian family of the Habsburgs and niece of the Holy Roman Emperor Charles VI’s wife. Austrians were enthusiastic about the match, hoping to gain an influence on Prussia. Sadly, Prince Frederick was much less enthusiastic about it and the marriage seems to have been less than loving. After he became king Frederick banned Elisabeth from his court and gave her a separate palace and apartments to live in. There were no children. Frederick had no known affairs, and allowed very few women in his court. He simply does not appear to have loved his wife very much.

When Frederick became king in 1740 Prussia was not a single country, but was made up of many scattered territories. His title was only King in Prussia because he did not rule the entirety of historic Prussia. After several military campaigns and the acquirement of Royal (West) Prussia in 1772, Frederick could accurately title himself King of Prussia.

Frederick William died in 1740, and Frederick became king. The Prussia he inherited was only a small part of the kingdom we read about later in the history books. But by 1772 Frederick acquired and united the surrounding lands making him a significant force to be reckoned with. As long as his father had lived, Frederick had resented his military upbringing and preferred any subject other than his father’s training. Ironically enough, however, when he became king it was his military training that perhaps made the biggest impact on his rule. King Frederick attacked Austria, conquered Silesia and Polish territories, and won acclaim for himself and Prussia. He often personally led his military forces into battle and had six horses shot out from under him. He became famous for his brilliant military campaigns and is admired as one of the great tactical geniuses of all time. It was said that Napoleon, standing over his grave, remarked that if Frederick the Great were still alive he would not have been able to get as far as he did.

One of King Frederick’s goals was to modernize his lands, which he accomplished through strong economics and political reform. One of his greatest achievements in this area was to control the grain prices, where the government would store food to help civilians to survive when the harvest was poor. Unlike many other governments at the time, Frederick was very tolerant of different religions and peoples, welcoming displaced citizens of other countries as long as they were productive members of society. Frederick also continued to display his love of the arts and ordered the construction of famous buildings that still survive to this day, such as the Berlin State Opera, the Royal library, St. Hedwig’s Cathedral, and Prince Henry’s palace (now Humboldt University). He also had a love of philosophy and aspired to be a Platonic philosopher king, writing a book to counter Machiavelli’s The Prince, and corresponding for many years with the philosopher Voltaire. Another of his interests was music, and he himself was a gifted musician, playing the transverse flute. He also composed 100 sonatas for flute and four symphonies. Frederick spoke German, French, English, Spanish, Portuguese, and Italian, and understood Latin, ancient and modern Greek, and Hebrew.

Plainly Frederick’s interests and work as a ruler was extremely varied. It could even be said that this sheer variety of influences contributed to Frederick’s greatness. His rule was as multifaceted as his interests, affecting a bewildering number of disparate disciplines. He set goals to improve his nation in a host of areas and succeeded in achieving them: not only showing an acute military mind in battle, but working hard to progress his country and citizens in a plethora of peaceful arenas. Frederick the Great is a prime demonstration that a good king should rule a variety of arenas.

(To find more about the book you can check out its page here.)