Published by Aaron Gruben on May 11, 2016
One of the things that stood out while researching and writing my new book Crescent Tides (which I’m excited to say will come out very soon), was the frequent similarity between the 16thcentury Ottoman Empire and modern day ISIS. I continue to read headlines from the ongoing terrorism against the Western world while immersing myself in the convoluted politics of 16th century religious wars. I feel like I can relate to the fears an Italian or Spaniard in 1571 might have faced just a little bit more because of the wicked acts of ISIS.

Here are a few striking similarities I’ve noted between the Ottoman bogeyman that threatened the Mediterranean world and beyond, and the specter of ISIS actively threatening our world today.
Ideology/theology: “In the Ottoman Empire, the ulema came to espouse an orthodox Sunni Islam, and a sharia law following the Hanafi School, which gradually became the dominant form of Islam particularly in the urban centers of the Empire.” –from my book. ISIS also is fiercely Sunni, viewing Shiism as apostasy warranting death. ISIS follows a notoriously strict interpretation of sharia (the practical/legal application of Qur’anic law). Many of the terrorist state’s appalling actions find counterparts in past Ottoman practices, and are an outward manifestation of a common and firmly held adherence to this strict form of sharia.
Statism: A key distinguishing characteristic of the Islamic State is that it is a state. One of its major claims is that ISIS is restoring the Caliphate. And by reinstating a caliph, ISIS demands that every “faithful” Muslim ought to submit to his authority and live under his rule. The ruler of the Ottoman Empire, while calling himself the Sultan (more of a political ruler), frequently took on the role of Caliph (political andreligious head of the state) both officially and functionally. Like the ISIS Caliph, the Ottoman Sultan had the final and authoritative word on both secular and religious matters.
Slavery of Women: ISIS has published justifications for enslaving women. A striking example is discussed in this article analyzing a piece from Dabiq (the English language magazine published by ISIS). The author is not obscure about the issue…
“The article reminds its readers that the legality of slavery is established in sharia (Islamic) law, saying, ‘Before Shaytan [Satan] reveals his doubts to the weak-minded and weak-hearted, one should remember that enslaving the families of the kuffar [infidels] and taking their women as concubines is a firmly established asped of the Shari’ahthat if one were to deny or mock, he would be denying and mocking the verses of the Qur’an and the narration of the Prophet…and thereby apostatizing from Islam.’”
While polygamy was less common in the Ottoman Empire than is often believed, countless women were sold as slaves and forced into harems of the wealthy and powerful. In the referenced article, ISIS takes the position that polytheist women are legally subject to slavery, while Jews and Christians are either subject to a fierce tax or murdered.
Devşirme: The devşirme was the practice of kidnapping Christian children with the intent to convert them to Islam and train them to be terrorist soldiers. This was a major means of augmenting the military in the Ottoman Empire, and the boys taken were most often inducted into the Janissary corps. In the 16th century, it has been estimated that between 1,000-3,000 boys were taken by the devşirmein the Balkans alone.[1] This practice, justified theologically by defining Christian boys as part of “the fifth” of the plunder due to Muslim conquerors, has been used by ISIS as well. One published incidentinvolved the kidnapping of 127 children from Mosul. Some of these boys who escaped describe a brutal process of indoctrination, involving threats of violence if they don’t comply, and being told they need to train as terrorists to go kill their parents.
Dhimmitude/Jizya: Non-Muslims living in Muslim owned territory (often because it had been conquered by Muslims) were under the dhimma, a rule imposing a stiff tax called jizya. This was done in exchange for being allowed to live without conversion. The early modern Ottoman Empire was a rapidly expanding, aggressive empire which engulfed many Christian lands and placed in dhimmitude those Christians spared from death or slavery. Not surprisingly, ISIS puts this Qur’anic teaching into practice as well. An example is the 2014 publicly announced threat for Christians in Mosul to either convert, pay the jizya, or die. Graeme Wood, in a penetrating article detailing ISIS beliefs, said this…
“In fact, much of what the group does looks nonsensical except in light of a sincere, carefully considered commitment to returning civilization to the seventh-century legal environment, and ultimately to bringing about the apocalypse.”
It turns out that that there really isn’t anything new under the sun. We in this century who have experienced just a little bit of the terrorist tactics of fundamentalist Muslims ought to be able to sympathize with Medieval and Early Modern non-Muslims who lived under similar Mohammedan threats (threats often much more extensive and close to home than ISIS is to us).
Perhaps we should not be surprised, when examining one of the religions invented by the Devil, to find striking similarities between some of history’s most fundamentalist manifestations of this belief system. Despite ISIS declaring distain for the 1920’s Ottoman Empire which dissolved the Caliphate, I suspect an ISIS terrorist might have much in common with his Islamic brethren in the 16th century Janissary corps. In fact, if it were only possible for a 21st century terrorist of ISIS ilk to travel back through the corridors of time, I suspect he’d like nothing better than to promote the advancement of the Ottoman Empire against the Western world. Hmm… Now that might make an incredible story line for a novel!! 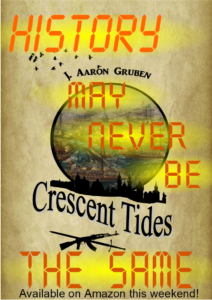