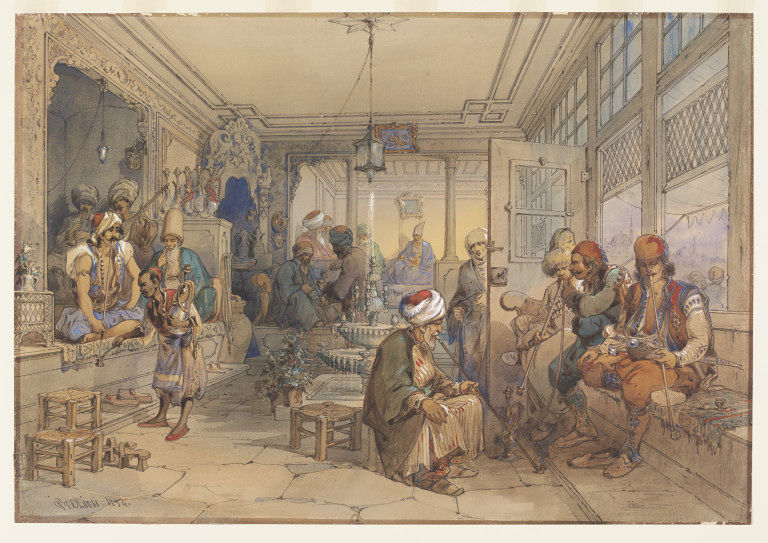 Published by Aaron Gruben on January 30, 2016
Wæs ðu hal [1] fellow pilgrims all!
This is a quick blog post to apologize for not posting anything for a long time and let the world know that I have not been assassinated by a shadowy government organization or stolen away by aliens. I’ve just been working 50+ hours per week, getting ready to bring another baby Gruben into the world, harvesting pecan trees, and various other activities.
I have, however, also been researching for and editing my upcoming book Crescent Tides. It is behind schedule, but it is still coming (Lord willing). I continue to get more excited about it! I just finished an excellent and scholarly work on daily life in the Ottoman Empire, and jotted down some seven pages of notes. It was a useful book! Here are some fascinating random facts I learned about the Ottomans. [2]
Coffeehouses rapidly became a major meeting place for Ottoman men during the 16th century. Coffee may have arrived in Constantinople as early as 1517 and gained massive popularity by the end of the century, despite the opposition of the ulema who argued that it was forbidden by the Qur’an and damaging to society. Coffee arrived in the Ottoman Empire through their Arabian conquests, and they later introduced it to Europe. The Arabic “qahwa” became Turksish “kahve” which became European “kaffe” or “coffee.”
Ottoman merchantswere organized into very specialized guilds with their own rallying cries, religious leaders, and patron saints. In Constantinople there was even a Guild of Pickpockets! Governed by strict religious laws, guilds were used by the state to encourage order on the street level. The muhtasib (market inspector) functioned as a policeman, handing malefactors he discovered over the kadi (religious judge) for punishment. Some of the punishments meted out to those unfortunate enough to be caught by the muhtasib were indeed brutal. For example, an accepted punishment for a thief was to leave him nailed to the shop door by the ears and feet for two days with no food or water.
Sufism was an Islamic mysticism that emphasized the experiential aspect of religion, and shared similarities to Buddhism and other religions. There were many different groups of Sufis, each followers of a specific Sufi master (or Şeyh), with their own “brotherhood” and lodge that would serve as their meeting place. In the Ottoman Empire sufism was essentially a reaction to strict legalism of the Sunni Ulema, and these two factions were often at odds. Sufi uprisings caused significant civil wars more than once in Ottoman history.

The devşirmewas the deplorable Ottoman practice of taking young Christian boys from conquered territory to convert, train, and utilize as soldiers (and, starting mostly with Mehmed II in the 15th century, were also sometimes made into government officials). The practice started during the reign of Murad I (1362-1389) and was considered theologically justified by defining Christian boys as “the fifth” of the plunder due the Sultan as conqueror of a country. In the 16th century, it has been estimated that 1,000-3,000 boys were taken by the devşirme. The more promising of the slaves stolen from their parents were trained with the Ottoman princes in the Palace School within the third courtyard of the Topkapi Palace. In addition to being indoctrinated in the Islamic religion, these boys were taught to read and pray in Arabic, speak Turkish, bear proper posture before the Sultan (head down, hands folded in front of them), and use every kind of weapon proficiently. The majority of boys were trained as yeni ςeri (meaning “new soldiers,” shortened to janissary). This of course meant that if you were a Christian living in one of the countries under Ottoman rule, your son might be stolen from you, indoctrinated into Islam (damning his soul, in your view), and thentrained to fight against fellow Christians and perpetuate the process.
And now you know a little more about life in the Ottoman Empire. (Now just imagine a modern 21st century person flung into this life and you will start to get an idea of the excitement you will find in Crescent Tides…)
[1] A greeting in Old English, meaning approximately, “be well!”
[2] These facts are all gleaned from Mehrdad Kia. The Ottoman Empire. Greenwood Press: Santa Barbara, CA
Published inHistoryMy BooksTangled Eons