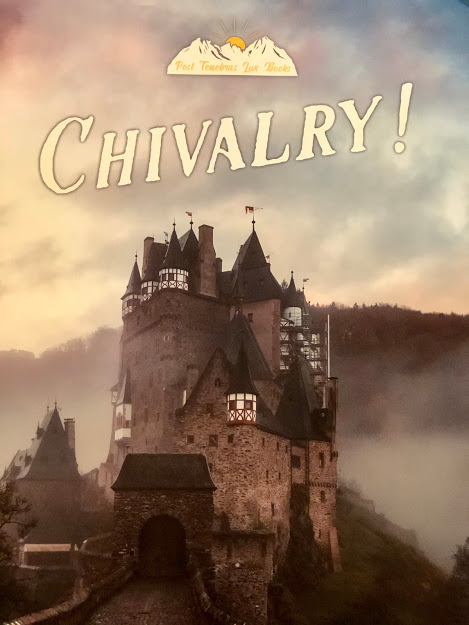 “If I then, your Lord and Teacher, have washed your feet, you also ought to wash one another’s feet. For I have given you an example, that you also should do just as I have done to you.” – John 13:14-15

“If society were to develop on another planet, apart from any influence of our culture or history, chivalry would probably not be a part of it.” This was a hypothetical comment, from a very astute participant at a conference where I recently spoke on the Ten Commandments of Chivalry. And it was a brilliant observation. Would chivalry and self-sacrifice naturally occur on its own?

Sacrifice is not natural. There is something counter-intuitive and surprising, something unexpectedly impractical, something super-natural about chivalry: especially about the sacrificial aspect. My simplified definition of chivalry is “codified Christian servanthood.” But, while a useful simplification, this fails to capture the splendid sacrificial aspect of the servanthood chivalry preaches. Because, at its root, the main thrust of the chivalric code is to teach us to be like Christ in our behavior toward others.

Christ is the archetype of self-sacrifice. Can anyone in history ever be found to demonstrate self-sacrifice at the level of the One who voluntarily dropped down from a throne in Heaven, as ruler of all things, to be stripped, beaten, mocked, and murdered on a cross – all for the sake of people who were his enemies? And chivalry tells us, “Have this mind among yourselves, which is yours in Christ Jesus” (Philippians 2:5).

Chivalry’s goal is self-sacrifice. The goal of chivalry is to build Christians who are strong and self-sacrificial. As any Christian becomes more orthodox, grows in his walk, and becomes more Christ-like, they will also necessarily become more chivalrous.

How does chivalry teach self-sacrifice? The code of chivalry was designed to teach Christ-like self-sacrifice in specific areas of living (and, in its origin, to specific classes of people). What are some ways that chivalry as a code teaches Christ-like sacrifice? As a refresher (or for those of you who may not have read my books on chivalry), following is the code of chivalry.

The Ten Commandments of Chivalry

This is an ideal to live by!

Chivalry as a lifestyle. It is something one is meant to embrace wholeheartedly and live out in action. It is a code we cling to, despite inclinations to the contrary, because we believe it right. Just keeping the code consistently requires self-sacrifice. But each Command teaches sacrificial living in its own way.

The First Commandment teaches that we ought to serve God more than anything else in life. We are to be devoted to Christ, to be zealous for Him. A chivalrous man now will say, along with the 13th century knight in the Gesta Romanorum, “If we maintain and cherish Christ by works of love and piety, the world indeed will abhor us- but better is it to be at enmity with the world than forego an inheritance in heaven.”[i]

The Second Commandment teaches that a Chivalrous Christian should sacrifice his time, his funds, his efforts for the protection and advancement of the church.

The Fourth Commandment teaches a Christian sacrificial love of his country.

The Fifth Commandment teaches courage, fortitude, and the strength. There are needed to follow through in the Christ-like acts of sacrifice.

The Sixth Commandment teaches a Christian to sacrifice time and talents and skills for the advancement of God’s kingdom against God’s enemies.

The Seventh Commandment teaches we must keep responsibilities and honor commitments, and make any sacrifice needed to do so.

The Eighth Commandment teaches that it’s better to lose face than be dishonest. It’s worth dying to yourself to keep your word.

The Ninth Commandment teaches that we should kill that miserly part inside of us and replace it with a large heart, ready to give even if it means sacrificing our comforts.

The Tenth Commandment teaches a Christian to look outside of himself to the cosmic battle raging all around. We must be idealists and care about promoting what’s right. It teaches us to make whatever sacrifices needed in order to fight the good fight.

Summary: the entire chivalric code requires self-sacrifice. One could spend a lifetime (and some have) pondering the nuances of Christ-like selflessness in the code of chivalry. But the point is that self-sacrifice, even extreme self-sacrifice, is required by each aspect of the chivalric code. This is part of the beauty of chivalry, and part of what has always made it manly and attractive. It is a spiritual athleticism (not aestheticism). It preaches a passionate pushing of yourself beyond what you thought your limits were for the sake of something higher.

It is a code to make you die to yourself, a way of life predicated on a vision outside of yourself – a vision you are willing to sweat and bleed and fight for.

The world lives the opposite of sacrifice. This is a drastically different calling than you will find anywhere else in this world. Circling back to our hypothetical comment, chivalry is not something any world would ever develop. That’s because the worldviews of pagandom are antithetical to the worldviews of Christendom. Darwinism preaches that the fittest should do what they must to survive. Christ preaches the opposite: the fittest should sacrifice, and even die for, the weak. Epicureanism, and its modern counterpart materialism, preach that a man should grab as much food and fun as he can: spend the little time he has in life getting the maximum enjoyment out of it. Christ preaches the opposite: a man should put off his cravings so that God can be honored and others around him can live well.

Chivalric sacrifice is supernatural. Christ-like chivalry teaches sacrificing my pleasures in order to please and promote others. This code is in many ways unnatural. It is supernatural. Sin-stained, selfish men would never have thought it up. And that’s why the selflessness taught by the Christian code of chivalry is so counter-intuitive, revolutionary, and beautiful.

Chivalry is desperately needed. Real, ancient-code, Christ-like chivalry is too important to ever die. Society needs it. The more sacrifice is scorned by the many, the more it is desperately needed by the few. Chivalry has a history of making heroes. And that has a lot to do with its overarching theme of sacrificial, servant living.

Change the church. The church also needs chivalry. She needs Christians who will risk their lives to promote the gospel and God’s glory. (Something recent, pandemic-related events have shown she’s shamefully lacking right now).

Change your life. God Himself calls you to be chivalrous, Christ-like, self-sacrificial Christians. He will be with you in the adventure that comes if you choose to follow his call. “For the eyes of the Lord run to and fro throughout the whole earth, to give strong support to those whose heart is blameless toward him” (2 Chronicles 16:9a).

Chivalry is Christ-like action and sacrifice. Chivalry is a breath of air in this stale, self-absorbed, sin-stained world remaining after the Fall. It is a way of life that offers beauty and adventure, precisely because it offers a hard way of self-sacrifice and pain. The principles of chivalry are the way of our Savior toward other human beings, written out in deeds as costly as they are bold.

Chivalry is more than a useful code of servanthood. It is a code that builds sacrificial Christian warriors. Be one for our Savior!