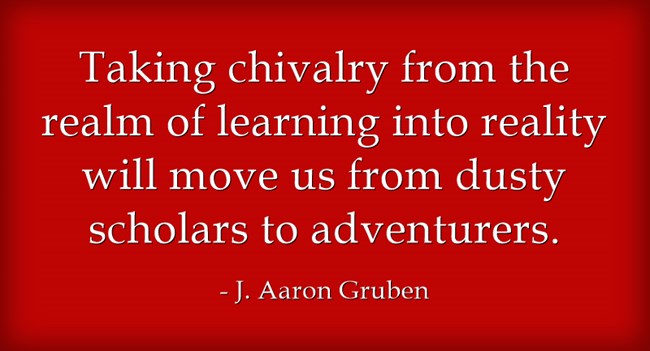 What is the secret to effective chivalry? One can read about the ideals and commandments of chivalry all day (thanks in large part to a chap named Leon Gautier). But how do you actually take ideals and morph them into practices and habits lived out? Wouldn’t it be great if we could ask a real knight that question, preferably a scholarly knight who’d seen battle with a sword and battle with the intellect? Fortunately, we can, in a sense. That’s because Ramon Lull, a 13th century Majorcan knight who became a monk, wrote a treatise on chivalry that is still being published today. Reading through a sampling of Lull’s work on chivalry, I’ve noticed four specific character qualities he commends in order to implement the ideals of chivalry.

Courage and strength are two words frequently married in Lull’s work. He rightly points out that to maintain deeds of chivalry, a knight needs courage. Courage is running out in the face of certain death for a cause worth dying for. But it is frequently found in much less dramatic settings. Courage is sometimes persevering in cleaning the house even though you fear the toddlers walking behind you and destroying it again. It is sometimes walking in to work when you fear a rough shift. It is sometimes talking to a person you don’t like to be around. Courage is sometimes just getting out of bed to face another day. All of life takes courage, so it should be no surprise to us that nobly upholding the honor of chivalry takes courage. That’s why Gautier’s Fifth Commandment of Chivalry is, “Thou shalt not recoil before thine enemy.”

The strength Lull is talking about often encompasses physical ability (part of the chivalric duty of knights required beating up bad guys, swinging swords in battle, etc). But strength of fortitude is even more in mind. Doing the Ten Commandments of Chivalry requires the strength of a marathoner. It requires the ability to ignore the inward voices of exhaustion or distraction, to choose again and again to do the chivalrous thing rather than the selfish thing. Paul calls what people see in our lives because of fortitude like this “a pattern of good works.” It takes strength to sustain the courage needed to be chivalrous day in and day out.

But raw courage and the ability to sustain it are not enough to get chivalric ideals out of the head and into life. Lull also enjoins diligence and swiftness. “The spurs are given to a knight to signify diligence and swiftness, because with these two things every knight may maintain his order in the high honor that belongs to it.”

Getting up and doing things requires that a person has drive. This is no less true of deeds of chivalry than it is of anything else in life. And in the case of a person aspiring to knightly chivalry, Lull reminds us “that he ought to be made ready to do all that which behooves the order of chivalry more than another man would.” Chivalry is essentially doing things. It is not just about knowing an old code or looking impressively noble to the world. It is about doing noble deeds that protect the weak, that uphold the faith, that defend the church, that prove patriotism, that advocate truth, that tear down falsehood. It is about doing things in life that build The Good and bulldoze The Evil. And you simply cannot get things like that done if you’re lazy.

Swiftness is just as important. I think the idea here is what we’d call “initiative” and it really springs from diligence. An effective practitioner of the Ancient Code of chivalry is ready to lead the way. He gets up and draws his sword first when he finds it required. He doesn’t wait around for someone else to fill the need before him.

These four virtues – courage, strength, diligence, and swiftness – are worth cultivating into life habits. Using them to take the Ten Commandments of chivalry from the realm of learning into reality will move us from dusty scholars to adventurers. Because adventure, Lull says elsewhere, is “the friend of chivalry.” We should always do the noble work of chivalry for the good of others – the most functional definition for chivalry is “codified Christian servanthood.”

But the amazing and paradoxical result (quite like Jesus tells us about the Christian life in Matthew 16:25) of dropping that video game or putting down that novel to go do something chivalrous for others, is that we find grand adventure beyond anything we could have experienced before!