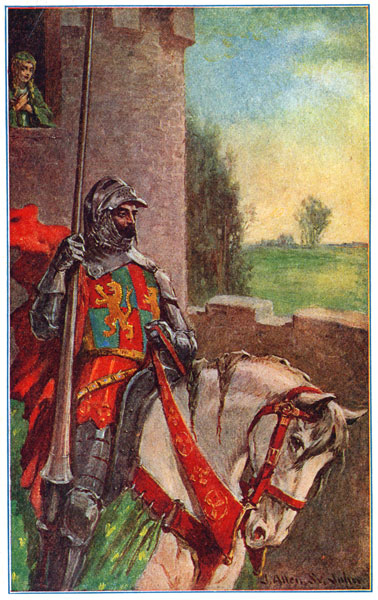 Another project I’m working on is a chivalry study for teenage students. Here is a rough draft of a day’s work near the beginning of the study. I’d love to hear your thoughts!

Chivalry is more than opening doors for a lady or letting someone cut in front of you at the grocery store. It is, in its essence, a sacrificial way of life. It is codified Christian servanthood. It is the discipline of habitually giving up yourself for those in need around you. Good chivalry is one way to become more like Christ, and because of this, it is an excellent thing for Christians to study and work to develop in their lives. That’s the most important concept to remember as you go through this study. The main goal is the make you a better Christian servant.

Historically, the concept of chivalry was born as an antidote to the chaos of the “dark ages.” I refer to the early medieval period after the fall of Rome in 476 AD, when the West was ruled by marauding bands of pagan and newly Christianized “barbarian” tribes, on whom the light of Christ was just starting to dawn. This was a time when “might makes right” was the slogan of the day, as the vacuum of power created when Rome’s stability crumbled left people open to being ruled by the whoever was had the strongest army. The concept of chivalry was an invention by the church of the day to direct the strength of Christian warriors to better things than killing each other. It is important to remember that this concept of chivalry developed gradually. It was not a sudden invention, or an official doctrine adopted by church councils or officials. It was, and is, a more nebulous way of life preached and demonstrated (and evolved by) many people throughout many centuries. But this does not mean that studying, codifying, and living it is an impossibility.

In fact, codifying chivalry (breaking it down into rules or concepts we can follow) has been done multiple times. The most effective code of chivalry in my opinion was distilled by Leon Gautier from old French Chansons de Geste (epic poems). He wrote a masterful book called “Chivalry,” and broke down the concepts of Christian chivalry into 10 commandments. We’ll follow his format in this study, and look at each of the “commandments of chivalry” in detail as you move through. Leon Gautier defines chivalry in the first chapter of his book. “[Chivalry]…arose from a German custom, which has been idealized by the church… Chivalry is the Christian form of the military profession: the knight is the Christian soldier.”[1] This is a very good, technical definition of chivalry, particularly applied to Gautier’s study of Medieval literature. But it is not as useful in trying to apply the concepts of chivalry to our own lives, because we are not all actual (though we may be metaphorical) soldiers. That’s why I created my own, broader definition of Chivalry above.

What kinds of things come to your mind when you think of chivalry (noun)?

What kinds of actions do you think of as chivalrous (adjective)?

Do most of these fit in some way into the broad definition of chivalry as “codified Christian servanthood?” If not, how would you modify the definition?

Memory Verse for the week:

Dust off your quill pen and ink:

Write out a list of questions you have about chivalry. Keep handy to reference and try to answer as you go through this study.

Write out some practical ways that you can be a Christian servant to the people God has put in your life.

Read some news for today. Is there any news item that demonstrates chivalrous action?

“There is more than one kind of Chivalry, and lance thrusts are not everything! In default of the sword we have the pen: failing the pen, speech: and in default of speech, honor, in our lives!” – Leon Gautier, in his preference to the book, Chivalry (p. viii)

“Not being able to prevent war, the Church has christianized the soldier.” – Leon Gautier  (p. 11)

“We aught to war against our vices, and make peace with our brethren.” – council of Kiersy, 858 AD